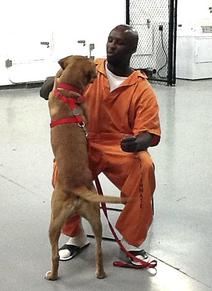 Beyond the Bars -  the Making of Mario

Canine CellMates doesn’t just invest time and effort into dogs.  The men at the Fulton County Jail who become the handlers of our recruits become part of the Canine CellMates team and family.  We do our best to support them in their efforts to grow and evolve while in the jail and continue our support when they get out.

This story is just one of many we are adding to our book about human perseverance in the face adversity.  It’s a story with all the key components - suspense, conflict, perseverance, success and most of all love.

Meet Mario.  Mario was in Cycle 1 of the Canine CellMate program.  The very first cycle to begin in Fulton County Jail.  We met Mario on June 3rd, 2013.  We were a bit nervous as we interviewed these men in orange jumpsuits so we could evaluate who would be a good fit for this inaugural cycle.  We had no idea what we were in for or what to expect.

Mario met us with a huge smile and lots of sparkling gold.  We’re sure he thought these “nice white ladies from the burbs”, as they call us, had absolutely no idea what they were doing.  We didn’t, but we were there ready to wing it!

Mario entered the program and stayed with us for a long time - a year, in fact, longer than any other participant who has ever been in our program.  We shared lots of laughs, hopes, tears, and disappointments while we watched Mario grow and change.  We became so proud of the man Mario was, and the man that we knew he wanted to be.  We grew to love each of these men as the Canine CellMates program developed each day.

As our roles were defined by the needs of these men, we found ourselves helping Mario with his legal battle by convincing the Georgia Justice Project to take his case.  We were hopeful when Mario went to court that the judge would see and understand how much Mario had changed and would release him.  That was not to be, but he did receive a sentence far-reduced from what the Atlanta District Attorney was asking for.

Mario went to prison.  Our relationship with him continued through phone calls and letters.  There was continued hope and additional tears and more help to be offered by reaching out to the State Pardons and Paroles Board about his release.  The day finally came when we drove to south Georgia and greeted Mario as he left behind the steel gates - he was out.  And we couldn’t have been happier.

As we all know, life isn’t all rainbows and sugar plum fairies.  Mario encountered more struggles and he discovered just how hard it is to change everything in your life.  But he persevered. And he rebelled and complied and persevered some more.

Mario got a job through a lead provided by a Canine CellMates volunteer and he went to work.  This was a “real” job and Mario’s first one!  We helped him open a bank account all the while Mario was shaking his head and saying, “Miss Susan, WHAT am I going to need this for?”

In the midst of all of the amazing things opening up for Mario, one door slammed shut.  Mario lost his place to live.  He didn’t lose faith or give up, he worked and persevered some more.

Mario, a man who had done many things wrong in his life, then did the almost unbelievable - through his hard work and perseverance Mario was nominated by the large restaurant group he was working for as “Employee of the Year”.  Unfortunately he didn’t win - he was up against very long term employees - but he was nominated!!   And that is so much to be proud of as it is!

There was still the fact that Mario lost his place to live.  We asked our followers and supporters for help in finding Mario a house to rent.  Someone heard our plea, stepped up and said “I will”.  Mario recently moved into this house and has continually worked on it, painted it and cleaned it.  He couldn’t be happier and prouder.

And just the other week Mario came off of parole for the first time in his adult life.

As Mario continues on his path, we cannot begin to tell him him how proud we are!  And to think, it all started with that tentative introduction across a metal table - just Mario and the “nice white ladies from the burbs”.  We love you Mario!


As an added side note - we received a letter from Mario the other day and thought it would be a great addition to this “Beyond the Bars” story.

This is what our progam is about - helping men to grow and change and lead productive lives. If any of this story touched your heart, please join us in our efforts. Support us, volunteer with us, donate, or adopt one of our dogs. Thank you! 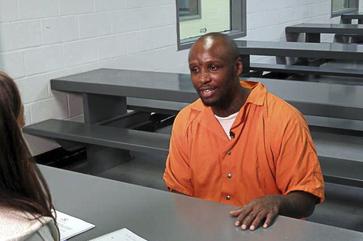 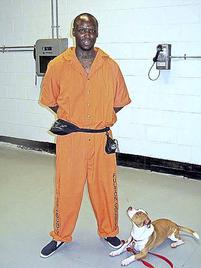 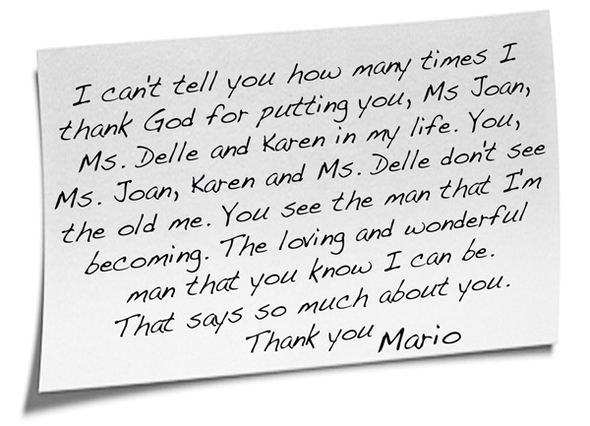 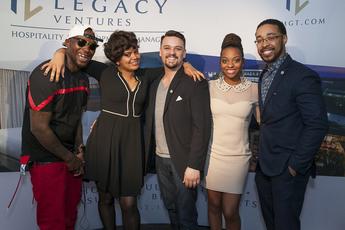 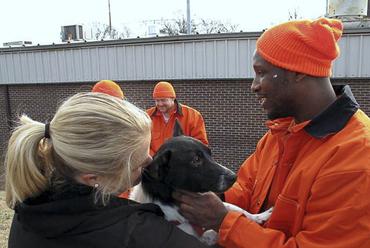