Susan's Blog I Videos I Special Events I Press Releases

Canine CellMates: How dog and inmates save each other! June 29, 2015   Hanna Gondola / The Daily Share

In 2013, about 40% of dogs brought to Fulton County, Georgia, pounds were put down. Susan Jacobs-Meadows wanted to do something about it. Inspired by similar programs in other cities, she founded Canine CellMates. The idea behind the 10-week program is to pair a dog about to be euthanized with a nonviolent inmate who is about to join the outside world. Read Full Article 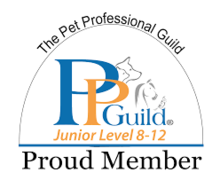 CANINES AND CONTROVERSY... THE BELTLINE ART SHAKE UP

You may have heard about a photography exhibit that was displayed on the Atlanta Beltline recently, in which images of the Canine CellMates program, taken by photographer Kelly Kline, were prominantly displayed and publicly removed. This is the statement issued today jointly by Canine CellMates and Kelly Kline that addresses our position on these events:

The images of the Canine CellMates program recently removed from the Atlanta Beltline were intended to highlight a positive rehabilitation program within the Fulton County Jail. The anger over these images is misdirected and those seeking to ban the images are misinformed.   The Canine CellMates mission statement, "Utilizing Shelter Dogs to Change the Lives of Incarcerated Men," is the core of our program. We are on the front lines, working every day to counteract the problem of recidivism. We are helping men affected by incarceration change their lives in positive ways, so that they can return to the community as productive citizens.

The demographic disparity of that wider population need not - we feel - ever be whispered about or concealed in any way by anyone. We only see incarcerated men who need a second chance at life. We see men with the potential to become good citizens and loving fathers.  READ MORE CLICK HERE 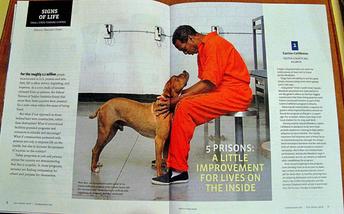 Inmates in jail and dogs about to be euthanized don't typically cross paths. But at the Atlanta Fulton County Jail, inmates and dogs, both destined for a difficult road ahead, are finding love and compassion in one another. Read Full Article

In January 2012, she started Canine CellMates and began to develop a program that would be dedicated to reducing recidivism and improving the lives of inmates while saving dogs from euthanasia. After 18 months of working with Fulton County and the community, the program officially launched on June 3 at the Fulton County Jail.

Canine CellMates, based in Fulton County, Georgia is having a huge impact on the local jail. Dogs who otherwise would be euthanized are paired with inmates so both of them have the opportunity to "get out on good behavior." The program's founder, Susan Jacobs-Meadows, started Canine CellMates to save dogs; she didn't realize how much she would fall in love with helping the inmates. Now, she is taking her passion for rescue to a whole new level. 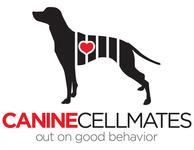