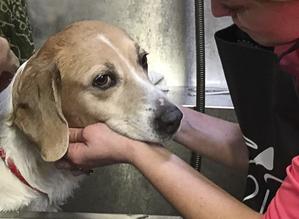 Juno and Arthur, the Journey Home

Arthur getting his first bath. 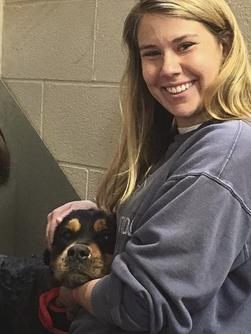 A happy tail ending for Juno who's real name is Pelusa and Arthur who answers to Cooper.

Canine CellMates isn’t just an organization that solely works behind the bars of the Fulton County Jail.  Each day we strive to make a difference in the lives of dogs and men behind bars and sometimes situations arise where we are challenged to follow our path outside of the prison walls to help people and dogs come together.

But not all things go as planned.  Early in the program Juno began to show signs of fear

and clearly wasn’t thriving in the jail environment.  As to not escalate her fears, we

removed her from the program into boarding and continued to work with her there.

We also would continue to look for a good home for her.

Arthur on the other hand, was thriving and loving all the attention, love and training that

Fast forward a few days and we received a call from the Shelter.  Apparently Juno and Arthur were “siblings” and came from the same home, and their owners were looking for them.  We were shocked.  We accepted them into the our Program well after the standard holding time, so we would have never believed they had a family.  But they did.

We found out they had gotten out of their yard and the next door neighbor believed they had killed a feral cat she had been feeding.  Since the owners weren’t home at the time, she called Animal Control, who came and picked them up.

Animal Control left a note on the family’s door and a few days later a woman called about them.  After a short conversation the woman said, “I’m not sure we are going to reclaim the dogs”.

Both dogs weren’t reclaimed and no additional calls came in from the family.

More than two weeks after that initial call, and days after we accepted them into the Canine CellMates Program, a very nice man came to the shelter inquiring about Juno and Arthur.

He waited a long time to speak with the shelter director and when they finally met, he gave her his story.   He had been out of town when the dogs were brought into FCAS and we found out later, he had asked his wife to wait until he got home before reclaiming them because he felt they would be safe there while he was away.

The director explained that Arthur and Juno had been adopted and he was utterly heartbroken.

That’s when we received a call from the FCAS director and she told me their story.

We reached out to this family and offered to help them as an intermediary.  We didn’t tell them who we were or any of the circumstances about the dogs.  We set up a meeting and took a team including a bilingual member of Canine CellMates to help bridge communications, and to help us get the whole story.  Our goal was to do a home check and make sure these dogs were in an environment that was safe, and where they were loved.  Since Juno and Arthur were currently in Canine CellMates’ care, we wanted to make sure for their well being, just as we do with any of the dogs in our program, before making this difficult decision on what to do.  This was a first for Canine CellMates and we wanted to get this right the first time.

We were invited to their home past the airport.  This family opened up their lovely home to us and showed us all the work they have done to try and keep these dogs inside their fence.  It was a tall wooden fence with and electric fence running along it as a double measure, but we could see there were several areas where the dogs had breached the fence and had been successful in escaping.

This family clearly loved their dogs.  There were dog toys, a dog door, and dog beds all in abundance.  They also explained how their children cry for their dogs, which are true members of their family.

In our care we discovered Juno had heart worms.  So we asked them if they knew that heart worms were a preventable and curable condition.   They explained they did not.  Apparently their vet told them that some dogs “just had heart worms”.

We then asked if we offered to help them with heart worm prevention and a cure for Juno’s heart worms, would they be open to that?  They replied immediately, “Oh, yes!!  We will do anything.”

They also explained to us their concern for Juno because she didn’t like unfamiliar people.  They worried her new owners wouldn’t understand her and this would lead to a bad outcome.

We left them with a promise to try and help them regain their dogs before their son’s birthday which was occurring later in the week.

Our decision was easy.  This was clearly a family who loved their dogs.


Later that same day, we called them back and told them were could arrange to get Juno and Arthur back to them.  We asked them to meet us at the shelter on Sunday morning.  When they arrived we told them who were were and that Canine CellMates had in fact pulled both of their dogs for our program.  WHAT ARE THE ODDS OF THAT???

We explained that while we did remove Juno from the program, because she had started having some fear responses that we felt we could not resolve in the jail environment, she loved us and we loved her back! We had placed her in boarding so that we could work with her and get her ready to adopt.

We also explained that Arthur was in the jail and was definitely a favorite there.

The family was in tears as I told them about their dogs.  We explained that we wanted to help them repair their fence too, so the dogs wouldn’t escape once again.

We also told them we wanted to help them get Juno heart worm treated and to make sure both dogs were on a heart worm preventative.  They agreed and were very happy to accept our help.

We then laid out the game plan to reunite this family with their fur kids.  We told them we were going to drive over to the jail, where their dogs were, and to follow us.  One of our volunteers would meet us bringing Juno and then one of us would go inside and get Arthur and bring him out.

We gave them photos of their dogs with the handlers in our program and we then headed to the jail.

Our volunteer arrived with Juno.  She bounded out of the vehicle directly into her owner’s arms!  There was joy and tears all around while Juno bounded from one family member to the other and then running over to us to give us big sloppy kisses.  She was back where she belonged and it was evident Juno was elated!

We had notified the guys in our program before this meeting, that Arthur would be leaving.  This gave them time to say their good-byes and there were more than a couple of tears that were shed.

When we brought Arthur outside, he too was extremely happy to see his family.  We hugged everyone multiple times and shed many tears of joy over the happy ending of this story and the reunion between these beautiful dogs and their loving family.

We wish them many happy years together and know in our hearts we were meant to save these dogs to get them safely back home.